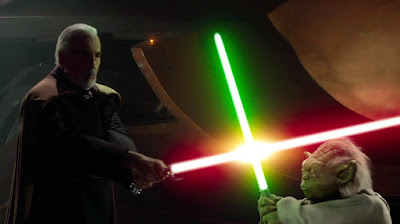 10. Anakin and Obi-Wan vs. Dooku (Revenge of the Sith)
This is a great duel that shows many sides to Anakin, but Obi-Wan didn't do enough in it, and Palpatine telling Anakin to "do it" is just memetically weird.

9. Mace Windu vs. Palpatine (Revenge of the Sith)
The galaxy's phantom menace becomes real in this one, but what makes Mace Windu so much better and more steadfast than those three other Jedi Palpatine killed?

8. Yoda vs. Dooku (Attack of the Clones, pictured above)
Yoda's leaping style in this short little duel shows no one is a match for him. Yoda's mini-lightsaber is called a shoto. "Carry a shoto, I do."

7. Finn and Rey vs. Kylo Ren (The Force Awakens)
We had yet to see a duel in Star Wars in the middle of nature - they were always in some technological-looking setting. This duel in the snow is a memorable moment from the newest installment in Star Wars, but I still wished the music for it would have been better.

6. Yoda vs. Palpatine (Revenge of the Sith)
Yoda shows his mobile self in this duel as well, as he puts his immense Force powers to the test against the Emperor. I like how the end of this duel shows how strong Yoda's claws are, as he clings to and scrapes a Senate platform.

5. Obi-Wan vs. Darth Vader (Star Wars)
It's not the actual duel that makes this one interesting, but the emotional touches. Could it be more emotional with these two former friends meeting after so long? Perhaps with a flashback to their first battle...

4. Obi-Wan vs. Darth Vader (Revenge of the Sith)
Which is next on the list. This emotional lava duel is an incredible spectacle of visual effects. Only I wish Vader's lightsaber would have been red during this duel.

3. Luke vs. Darth Vader (Return of the Jedi)
This emotional conflict between a father and a son could have had more and better music, but is an appropriate ending to the film, but there's a goof that kind of screws it up. Vader's lightsaber blade has a shadow. Oops.

2. Qui-Gon and Obi-Wan vs. Darth Maul (The Phantom Menace)
This is how you set music to a lightsaber duel. Darth Maul is an incredible evil force, so much that it is a two-on-one fight and the Jedi still seem like the underdogs, and John Williams's "Duel of the Fates" score is incredibly good.

1. Luke vs. Darth Vader (The Empire Strikes Back)
When people hear the words "lightsaber duel", it's this one they think of, but like so many other duels on this list, I wish John Williams had scored it better, perhaps with a choral ensemble like "Duel of the Fates". The real reason this made the list, however is the ending of the duel, which is the stuff of legend.
Movies Star Wars

12 Scrabble Words That SHOULD Be Acceptable, But Aren't

A few months ago I did a list of 12 Scrabble Words That Shouldn't Be Acceptable, like "za" and "zzz". Now, I give you 12 words that are not Scrabble-accepted, but should be. 1. Niggardly. Meaning "stingily", this word used to be acceptable, but was banned in 2013. I guess because it sounds too much like a well-known racial slur? It's an innocent word that should be legit, and the letters aren't that hard to get. 2. Kwyjibo. Yes, this Simpsons- coined word, defined as "a fat, dumb, balding North American ape with no chin", should really be acceptable. It could get you a lot of points, and could even evolve new meanings. Kwyjibo could come to mean "a Fox News-watching conservative senior citizen that is almost always in a grouchy mood." 3. Trumpify. Meaning "to preach hate and use other people's fears for your own advantage." I sense many conservatives may have just stopped reading my post. 4. F
Read more